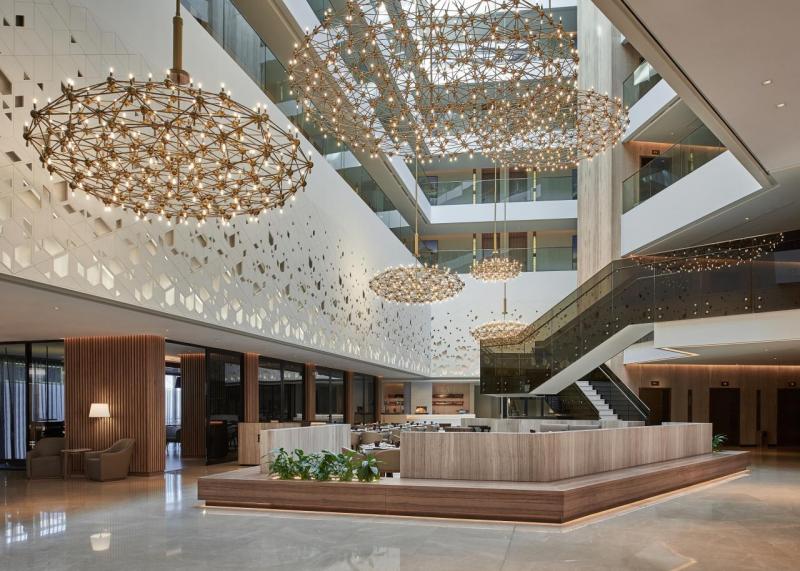 Designed around a contemporary interpretation of Arabic patterns, calligraphy and Omani culture the Mysk Al Mouj is an internationally branded hotel operated by Shaza Hotels Group.

A sense of location was the main inspiration running through the hotel.  Through distilling the essence of the surroundings we aimed to create a contemporary 4-star hotel with a sense of belonging.
The sights, sounds, light and materials of the marina together with the Muscat coastline were studied and referenced throughout the interior design.

The approach for the lighting design was to express architectural elements and forms by night reflecting the building’s presence and creating a subtle but effective scheme. The integrated light pays due consideration to the surrounding environment, the hotel’s proximity to the marina and its vistas.

Due to the tight irregular shaped site and the limited view opportunities on two of the available three facades, an early design decision was to focus on creating an exciting series of internal spaces that mimic the feeling of exploring the local ‘wadis’ which are deep canyon like river beds carved out of the soft stone.  Like these natural features they funnel light deep into the building which is constantly changing as the sun angle moves throughout the day and seasons. With all rooms facing into the central space the internal circulation appears to be always active as guests traverse horizontally through the open corridors and vertically through the scenic lifts to all day dining located on the base of the largest atrium.   Where possible the main facades where then rotated to maximise the views towards the marina and rising sun.

A light palette with subtle overtones of local arabesque geometry was chosen to enrich the interior spaces and acknowledge the proud culture of Oman in a contemporary fashion.  Using light colours helped to reflect light deep into the central spaces whilst unifying the appearance of the exposed corridors walls, doors and signage which is exposed to the arrival space.  At night the internal space changes character as the skies darken and artificial lighting creates a warm glow from the sculptural atrium lights and secondary lighting highlights the geometric detailing.  The accent colours used throughout were chosen from an analysis of the aqua marine colour of the Indian Ocean and white sands.